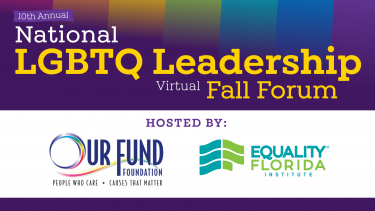 Our Fund and Equality Florida invite you to join national LGBTQ leaders to discuss the future of the equality movement, regardless of the election outcome. While we will miss being with you in person this year, we are pleased that the event will be made available to a wider audience. 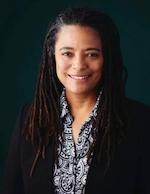 Nadine Smith (She/Her) is co-founder and executive director of Equality Florida, the state’s LGBTQ advocacy organization. She served as one of four national co-chairs on the 1993 March on Washington and participated in the historic, first-ever meeting between LGBT leaders and a sitting U.S. president (Clinton) in the White House. She currently serves as chair of the Leadership Team for State Voices Florida a coalition of progressive 501c3 organizations. Nadine has been recognized for her national and state leadership by The Task Force, HRC, NCLR, the National Black Lesbian and Gay Leadership Forum, The League of Women Voters, and others. 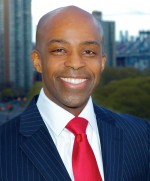 Mr. David has significant litigation and management experience in the public, private and not-for-profit sectors. He has been at the forefront of the movement for LGBTQ equality for more than a decade and worked at both the state and national level. For the past decade, Mr. David has served as an Adjunct Professor of Law. He began his work in academia with Fordham University Law School and continued at Benjamin N. Cardozo School of Law. He is a graduate of the University of Maryland and Temple University School of Law. 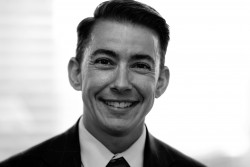 Kasey Suffredini (he/him) is a nationally recognized campaign strategist and expert in LGBTQ issue advocacy. His campaign leadership has resulted in hundreds of local, state, and federal policy victories over the course of his 20-year career. He has deep experience in campaign management, policy development, strategic communications, and grassroots mobilization and a track record of designing campaigns that change narratives, pass legislation, win ballot measures, and drive momentum on seemingly intractable issues.

As CEO and National Campaign Director at Freedom for All Americans, Kasey has been the chief architect of bipartisan campaigns to successfully secure a number of national firsts. These wins include passing the country’s first standalone statewide transgender public accommodations law, passing comprehensive statewide transgender nondiscrimination protections for the first time in a Republican-controlled state, and passing comprehensive statewide LGBTQ nondiscrimination protections for the first time in the South. From 2016-2018, Kasey co-chaired the historic, award-winning Freedom for All Massachusetts / Yes on 3 ballot campaign, winning the first statewide popular vote on transgender rights in U.S. history by a landslide two-thirds margin (68-32%). 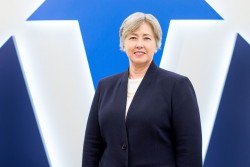 LGBTQ Victory Fund and Victory Institute President & CEO Annise Parker is the first former elected official to lead the organizations, having served six years as a Houston City Council member, six years as City Controller, and six years as Mayor of the city. She is one of only two women to have been elected mayor and is the only person in Houston history to have held the offices of council member, controller and mayor. She was the first openly LGBTQ mayor of a major American city.

Mayor Parker is a past member of President Obama’s Task Force on Climate Preparedness and Resilience, chaired the U.S. Conference of Mayors Criminal and Social Justice Committee. She is a past Fellow of the Institute of Politics at the Harvard Kennedy School of Government. She spent 20 years working in the oil and gas industry, primarily with Mosbacher Energy Company. She also co-owned Inklings, a lesbian/feminist bookstore for 10 years.

Aaron Belkin is founding director of the Palm Center, which the Advocate named as one of the most effective LGBTQ rights organizations in the nation. He designed and implemented much of the public education campaign that eroded popular support for military anti-gay and anti-transgender discrimination, and Harvard Law Professor Janet Halley said of Belkin that, "Probably no single person deserves more credit for the repeal of ‘don’t ask, don’t tell.’" In 2018, Belkin founded Take Back the Court, whose mission is to inform the public about the urgency of Supreme Court expansion as a necessary step for saving democracy.

Thanks to our Sponsors